Patrick Schiefen, 30, looks youthful with bleached blonde hair and flawless skin.  He seems stressed but excited about the upcoming launch of his self-published poetry collection “If you know you know”.  The book contains 18 poems exploring themes such as identity, LGBTQ issues, societal intolerance and self-acceptance.

Originally from Elmira, a small town in Upstate New York, he moved to Shanghai in 2011.  His poetic spirit is detectable in the intensity with which he constructs somewhat disjointed sentences that sound like they are trying to become verses in a rhyme.

He reveals a monochrome tattoo above his wrist of a cartoon-like cross-legged figure holding a banner that reads:  “not yet there”.  This is also the title of an earlier poem of his.  “My friends convinced me to do the title of my poem for a long time; I thought none of my own words – it’s a bit narcissistic, but I’m really, really connected to this poem in particular.”

These words seems to be like a mantra that is paraphrased all over the new collection of poetry.  One line from his poem “Knowing”, for instance, reads:  “I know I’d never find what I’m looking for, and know that I’d never want to.”

He explains how not knowing what he wanted to do in life initially caused him anxiety.  This started at an early age, since he comes from a family of “practical people”.  He fondly describes his parents as “closeted creative types”.

“My dad was a very good writer and he applied it to business; and my mom I discovered, growing up was a good drawer. But if it didn’t have a practical use, it was not encouraged. ”

He muses over vague childhood memories of getting to type stories in the school’s computer lab – something he did not feel brave enough to do at home in the open.  “I’ve been a kind of a black sheep when it comes to creating and writing. I used to do it with my door closed.”

Trying to do what is practical, he studied financial economics in college. “ I was thinking this is what a normal person does; this is what is expected of me and maybe if I do this now, in 5 years I will have something, I will have a job; but I could never really picture myself in that role .“

Working as an economics teacher in Shanghai he found a community which allowed him to explore his poetic talent:  “The creative energy here is really amazing, especially for people that are just starting or trying to figure it out.  A lot of other big cities like New York…London… are so established that you have to really be ready to go.  Here you have time to figure it out.”

He attributes a visit to Thailand and an almost fatal bike accident to his recent spiritual awakening. This led to him becoming more comfortable with not knowing what lies ahead in life for him.  “I realized that I had been an angry anxious person and the only end result of that is something bad – it could be the accident or even worse. I realized it’s the only way it could end and I need to find a way to let it go.”

With his new-found confidence Patrick often finds himself trying things he wouldn’t do back home, such as delivering dramatic performances of his work.  The rhythmic quality of his performances reveals his love for music:

“I was a poet that was inspired by music.  I’m very lyric based, I’m kind of a pop music kind of guy and I’m also into hip hop.”

Having had to deal with some anger as a child, he also found inspiration from rapper Eminem, whose internal rhymes he admires.  However, as Patrick became more politically aware, he started having mixed feelings about this artist:

“We are at a point now where being misogynistic and homophobic – especially in the mainstream, even if you tell people not to be so sensitive – there is not really a place for it.”

It took him a long while to gather up the courage to become more political in his writing.  He describes his earlier poems as “not that great”, since he held himself back from a lot of “real issues”.  He is particularly grateful for the support from his graphic designer boyfriend, Aiden Bra, who is also responsible for the layout design of the book. “It is great dating another artist.  I don’t think I would have been able to write these type of poems and also be brave enough to share them if I hadn’t met him.”

Although a self-described cis-male, Patrick finds great inspiration from the trans-community.  In poems like ‘Names’ and ‘Sacred’ he ties imagery of struggles from this community in with the search for identity:

“Everyone has challenges and there are difficult challenges specific to that community.  They have to fight so hard to claim who they are and they are really determined to do that and it is not easy.  I don’t know specifically what they are going through but it’s not easy.  And I find that really inspiring.”

He laughs nervously before he adds: “And if they are able to do that then I can do these small things you know?”

“If you know you know” was launched on May 12, 2019.  For book orders, visit Patrick’s website at:  patrickschiefen.com/the book 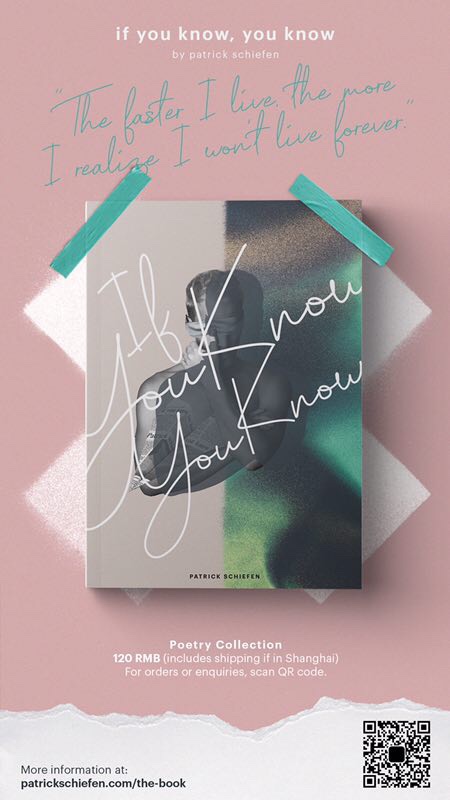 View all posts by shanghaifuns